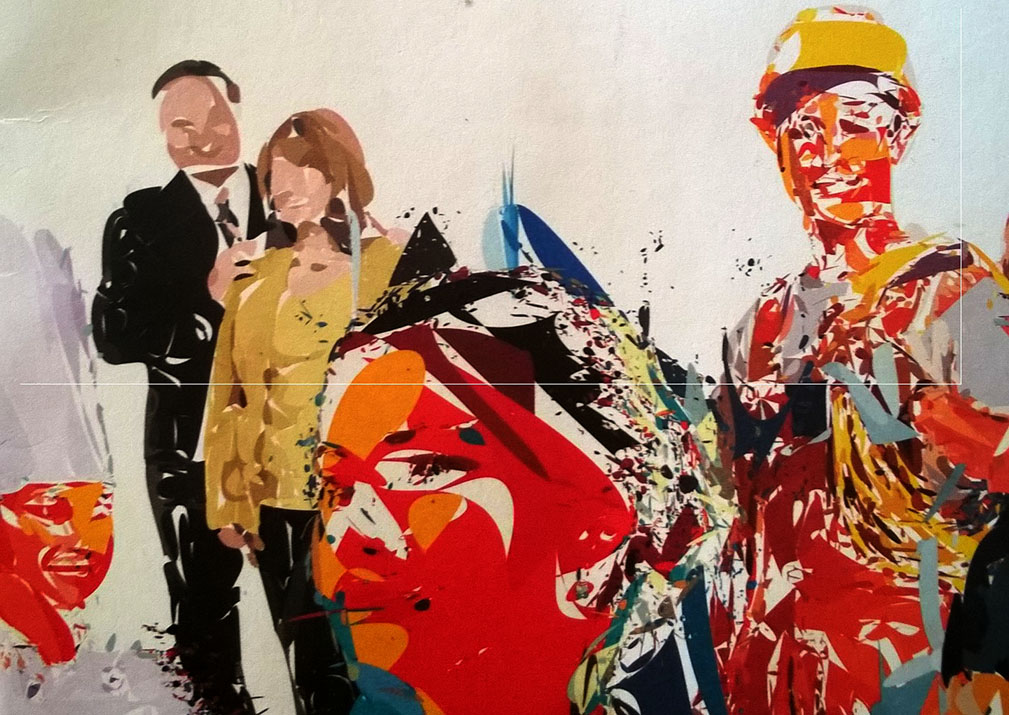 Here is the brochure “Moving Forw>ard” issued by the Government of Malta. First (but not foremost), let’s give it a credit for the sexy design. Do not worry, your government is not embarrassing you with the exposure of bad taste as you might suspect, on the contrary, the design is quite artistic. Now, if you are one of those overly sensitive individuals who put the aesthetics before the content, rejoice and read no further because further is all about the content.

1. Maltese have grown fonder of environment

“Have we moved forward as a country?” asks Sarah Haider from Communication Office of OPM. “Indeed, we have” she replies and supports her confidence with sound evidence. “Families now worry less about the costs of utilities and more about environment”.

Let’s give this argument a credit for both, its relevance and unmasked cynicism. On the one hand, it is a spot-on observation: the number of environmentally-concerned Maltese is certainly on the rise, proportionally to the steadily growing Maltese middle class. The environmental discourses are traditionally harboured within the middle class because

Thus, the brochure conspicuously implies that the Maltese have a luxury to worry about the environment more than about the costs of utilities because their material prosperity has significantly improved and – important! – the government is to be thanked for that. In other words, the worries about environment are powered by the economic advantages of the exploitation of this very environment. Had the environment not been exploited, the Maltese would not have the privilege (or the opportunity) to express such virtuous concerns.

But could the material prosperity be the only explanation for the growing public concern for nature conservation?

This is where the unmasked cynicism steps in: the concerns about environment are not only a luxury, sustained by the generally high prosperity level, but also are fueled by the objective reasons. The both parties in government gave the green light to the development of Tigné Point, Manoel Island, Zonqor, industrial aquaculture and the privatisation of the beaches.

Another reasonable question to ask is whether environment alone is central to the concerns of the Maltese people. And the answer is: unlikely. The remnants of undeveloped countryside and the lifestyle are being sacrificed in the name of the profit for the selected few. Thus, what is described as “worrying more about environment”, in reality refers to a broad spectrum of social and economic issues.

Take a deep breath and remember: the more you “worry about environment”, the more pride the major parties can take for mobilising your civil concerns. 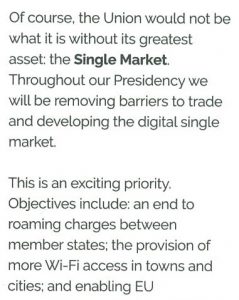 As follows from the brochure, the government is convinced that the digital single market is a way forward. The massive new digital monopolies and tech companies have amassed the power to move entire economies and Malta cannot resist the temptation to flirt with the world’s most powerful business lobby. The rapacious belly of iGaming companies and tech start-ups craves new food for their growth– consumers such as us.

The brochure advises, boldly and in caps, to stop relying on government as a source of income and to set-up a business instead. The government is committed to facilitate the perfect conditions for such endeavors: “start-up businesses will benefit from the abolition of the trade licences for a number of commercial activities”. “The law regulating shop-opening hours will also be changed. Businesses in Gozo will benefit from better IT connectivity” and “€3.2million will be invested in a second fibre optic link between Malta and Gozo”. 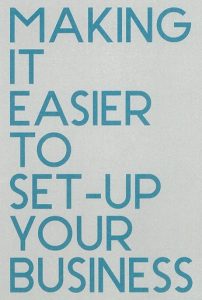 It wouldn’t harm to ask who benefits most from this new policy. The answer is: a number of foreign investors, tied up with the international tech giants and digital monopolies. While the construction business still remains a powerful lobby, the IT lobby is gaining strength and deserves your attention – the majority of the investors are foreigners who set foot in Malta to pursue their own mercenary interests and NOT for charitable, nor philanthropic reasons. The investors believe that “society works best when it’s organised around the entrepreneur.” If you don’t happen to be one, your only place in a society is to serve one.

In case you have any questions, these ladies and gentlemen should be able to answer them.

It’s time to stop referring to the money- and fame-grabbing rat race in such Christian terms as “greed”. The official governmental policy gives its full support to the manifestation of entrepreneurial skills and to the fulfillment of ambitions which hardly have any reference to God (except for that of profit).

3. Gozo: the new “nurse of the Mediterranean” (or selling Gozo to foreign investors)

Another chapter of the brochure is dedicated to the branding of Gozo as “the Medical hub of the Mediterranean, with visitors arriving throughout the year to receive first-class healthcare in a state-of-the-art hospital with world-class facilities in a tranquil environment”.

The upbeat and enthusiastic tone of this chapter might be misleading if you do not pay attention to such important detail as healthcare privatisation for the benefit of foreign investors. Quoting Times of Malta, “privatisation of national health services has become a source of concern in those countries which have opted to entrust state-funded health services to commercial companies. Their experience suggests that privatisation of health provision serves neither the best interests of patients, nor the state’s finances.”

Privatisation has led to lower priority being allocated to patient care because of the profit-driven nature of such an arrangement. There has been a severe loss of accountability with scrutiny of public spending being obscured by complex contracts. It has not been unknown for private health companies to reduce staff to a minimum and overcharge the state for outsourced services once they have won the contract.

The arrival of the “world-renowned Barts and the London School of Medicine and Dentistry” puts the free medical education in Malta at risk. Maltese medical students held a mock-up protest against this move.

“Our resources at hospital have been set up at the expense of the Maltese taxpayer. Barts are not building any new facilities, bringing in doctors of their own, or expanding infrastructure. They are hijacking what we have cultivated over decades. How will the Maltese working class, who paid for our NHS, benefit from a medical school that charges such exorbitant amounts?”

The access to healthcare services is not only a basic need but a fundamental right and this right should never be sacrificed in the name of profit. Wake up or lose your healthcare!

Gozo as you know it will soon seize to be. The implications of this change vary depending which side you are on. If you are weary of “the misdeeds of the canny Ghawdxin and their overindulgence of hunting”, rejoice – the foreign investors will not tolerate the lack of discipline from the provincial small folk, especially if it interferes with the running of their business. The investors will certainly attempt to tackle hunting and, most likely, they will succeed.

On the other hand, if you appreciated Gozo as the Malta’s prettier sister, an oasis of tranquility of immense charm, be prepared to mourn it – that place will soon exist only in your memories and photos. The cost of living in Gozo will shoot up to the sky and so will the cost of your previously affordable weekend holidays.

4.Wi-Fi State instead of the Welfare State

This point deserves a specific mention. Despite the claims that the digital age empowered literally everyone with a unique opportunity for self-education, the reliability of this “digital age” brochure leaves much to be desired. The welfare state is quite a recent achievement, brought by the social democracy in the second half of the 20th (not 19th!) century.

“The welfare state is a concept of government in which the state plays a key role in the protection and promotion of the social and economic well-being of its citizens. It is based on the principles of equality of opportunity, equitable distribution of wealth, and public responsibility for those unable to avail themselves of the minimal provisions for a good life.” The Nordic countries such as Iceland, Sweden, Norway, Denmark, and Finland, which regularly score high on the quality of life and democracy, are all described as social-democratic welfare states.

How can Wi-Fi access be an alternative to the free education and healthcare? Could it be that the government is dressing up the budget cuts on healthcare and education as the “modern and progressive” measures? If you truly believe that the “Wi-Fi state” taking over the welfare state signifies progress, try connecting to Wi-Fi next time you are in need for a medical assistance and see whether it will do just as good.

Now, that’s a sound commitment! The Maltese on minimum wage can finally feel privileged. It is time to get the message: the government does not favour the unfortunate who are unable to start their business and stand on their own feet.

Follow MaltaSketches on Facebook. Not to miss any posts from MaltaSketches, click the button “following” and then select “See first”. This will mean that your feed will always contain our posts. We only post a few times a month, so you won’t see too much of us. Grazzi!